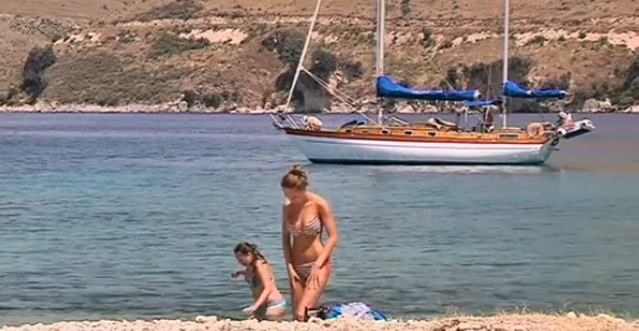 Albania was once an isolated Communist state, now the small Balkan country is on the road to EU membership, and hoping to attract foreign tourists. As Joanna Partridge reports, it hopes that its remaining unspoiled coastline as well as its military relics will bring in visitors.
▲ Hide Transcript

Once an isolated Communist state and known as the Balkan Wild West. Now Albania's on the road to EU membership. And bidding to become the region's next tourist trap. SOUNDBITE: Agnes Kuijl, Dutch tourist, saying (English): "It is a beautiful country and also in Albania it's very cheap." Now a tourist hotspot - Porto Palermo was once home to military submarines and closed to the public. Albania believes its areas of unspoiled coastline are a draw. But it also thinks visitors will be interested in the country's history and military relics, says the head of a newly created coastline agency. SOUNDBITE: Auron Tare , Director of Coastal Tourism, saying (English): "The submarine tunnel, built during the cold war, built for the submarines to hide here under the mountain, it is a kilometre long tunnel. A great example of a cold war attitude that Albania had during the communist period." Albania began its ride to capitalism in 1991, but years of political polarisation slowed democratic reform - and kept it behind some of its ex-Yugoslav peers. A reform push followed a change of government in 2013, which the EU rewarded by giving the country EU candidate status. Though it will have to meet further conditions to actually start entry negotiations.

Prime Minister Edi Rama has big plans for tourism. SOUNDBITE: Edi Rama, Albanian Prime Minister, saying (Albanian): "We believe that within two years we will see the first results of our transformation, as we believe that Albania deserves to be a new tourist destination in the Mediterranean because it is as yet unexplored, and because it has a number of elements that the developed Mediterranean has lost." The transformation plan includes cracking down on illegal building, and cleaning up rubbish. The owner of the Blue DAYS HOTEL

believes it's already having an effect. SOUNDBITE: Klodjan Memoali, Owner of "Blue Days" hotel, saying (Albanian): "We think that if the promised new investment by the government start by the end of the year - like the new Borsh boulevard, investment on the entire coast, including the Saranda airport which is also a government project - I think we can quickly fulfill all the ambitions we had in the last 20 years." Albania's promoting itself to the world with the motto "Go your own way". With such views, more visitors may begin to do just that...   http://uk.reuters.com/video/2014/08/14/albania-promises-tourists-coast-relics?videoId=339729300&videoChannel=2603
Pubblicato da Hoteleri Turizem "Albania" a 6:26 PM