Albánská premiéra na veletrhu Holiday World, At Holiday World this year presents several newcomers. One of them is the Albanian National Tourism Agency

At Holiday World this year presents several newcomers. One of them is the Albanian National Tourism Agency, whose CEO Mrs. Julinda Dham TTG gave a short interview. Foto: Archiv J. Dhame
Photo: Archives J. Dham
What news from Albania can look forward to professional and general public during the fair?

Czech market, along with other countries of Central Europe, an important goal for Albanian tourism. To participate in the fair Holiday World 2015, we decided to introduce our tourism potential Czech visitors. This occasion we would like to use primarily for presenting our hospitality and untouched Albanian coast. Our country has a lot to offer, and when it comes right on the tourist product, it is worth noticing long season, reasonable prices of accommodation, from camping through private accommodation to a very comfortable hotel.

In recent years, many Czech tourists arrives also in Albanian Alps to get here to enjoy outdoor activities. For fans of active tourism is why we recently made available šedesátikilometrovou route in Valbona Valley. The Albanian government has currently investing a lot in the road network in this area that is easily accessible to all visitors. Albanian National Tourism Agency is prepared during the fair Holiday World to provide the necessary information to all interested professional visitors and the general public. Along with the Albanian tourist companies including private sector plans daily meetings with partners who are interested in developing cooperation in the field of tourism.

How is your country involved in sustainable tourism?

Regarding sustainable tourism in Albania, our organization has signed a contract with the Institute for Nature Conservation in Albania (INCA). Together we work to promote sustainable tourism, especially in protected areas. Albania has a total of 13 national parks and a number of landscape areas with high potential for tourism, all of which merit special attention Karaburun peninsula and the island of Sazan. 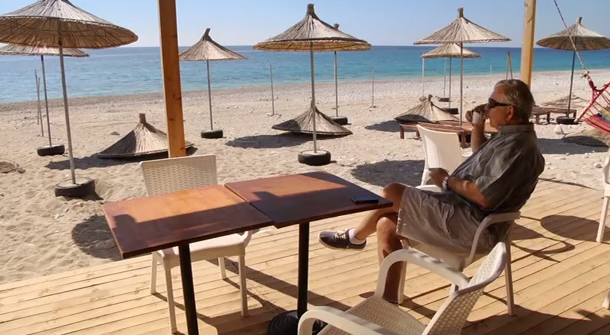 Pubblicato il 24 feb 2015
Czech Republic Television, Ceska TV aired a program dedicated to Albania: ”On the way to Albania”.
Have a look to this video, 25 minutes of amazing images and a beautiful Albanian story brought by czech journalist.

TOP 8 PLACES TO VISIT IN ALBANIA

Albania is a country that until now is only recognized by a few travellers, although the country on the Mediterranean Sea has many advantages. It is for example much cheaper and less crowded than more popular holiday countries. Those loving the wild nature, charm and Mediterranean air should definitely take a chance on Albania. Do this fast since at the moment it is still quiet and not that many people know what paradise awaits them there. A round trip to the most important places is a great opportunity to get to know the country.

The city of Berat is located at the river Osum in the middle of the country. In the past it was built as a castle and it is erected at a hill. At this hill there can be found the original castle, named Kalaja. The castle contains a district with numerous churches and mosques and is well worth seeing. Berat is also called the “city of thousand windows” because the typical houses have large window frontages. These windows design the skyline of the city. The white houses are listed buildings to keep the original appearance of the city. In 1961 Berat was elected “city of museums” and therefore is a great destination for those loving history and culture.
The surrounding of the city offers some small villages and typical countryside, that can also be visited on a trip.

In the southwest of the country there is a steep coastline, which can be compared to the Italian Riviera but is much quieter and less crowded. Beaches invite to go swimming or sunbathing. New built HOTELS AND

attractions shall allure tourists and promise a great holiday.
The countryside is mostly original and behind the beaches there can be found large and dramatic mountain settings. In the mountains numerous small romantic villages are hiding, perfect for small trips.

Next to the city of Fier in the middle of Albania one can find the ruins of an ancient town, named after the god Apollon. Apollonia was the biggest and most important city in the ancient world. The ruins are still impressing and show a little piece of the original glory. Libraries, temples, theatres and other buildings can be visited, as well as a triumphal arch and rotted mansions.
The historical place is very impressing. The view from the hills to the country is worth it as well.

The big city Durres at the coastline of Albania is the most important harbor city in the country. Not only from economic viewpoint but also culturally it is a capital. Cultural events and feastings take place all over the year. An important role in these events has the amphitheater, which is one of the most important attractions of the city. The impressive ancient building could provide place for about 20.000 people in the past and can be visited today.
Durres is one of the touristic centers of the country and besides culture and history it provides beaches and holiday fun.

The city in the south of Albania was elected UNESCO world cultural heritage. Reason for this is the unique architectural style, most of the buildings show. The style is called Balkan architecture and contains small castle-like houses made of stone. The stones should control the temperature in ancient times and today form the town’s landmark. Therefore the city is also called “city of stones”. It is located at the side of a hill and the single quarters are connected with artistic roads.
Gjirokastra has also many cultural attractions. Museums, theatres and religious places can be found in large numbers. Additionally every five years they celebrate the national folklore festival in the castle of the city.

Kruja is an Albanian town some 20 kilometers northeast of the capital. It is located at the side of the Skanderberg-mountains. The most important building in the town is the Kruja castle, which is a national sanctum for the Albanian people. It contains the Skanderberg museum, which is reminiscent of the war in this area. Further places next to the town are the tomb of Sari Saltiks and the national park Qafe Shtama. The small town has a large historical background and can also be visited as daytrip from the capital Tirana or from Durres.

Tirana is the capital city of Albania and forms the economic and political epicenter of the country. Many important facilities are located in Tirana for example the parliament and the government. The city is furthermore domicile for many political parties. The city is located at a river some 30 kilometers away from the coast. On one side it is enclosed by hills. Until 1920 when the city was named capital Tirana was not very important. But today it convinces with modern architecture and cultural facilities. The small cafés at the side of the roads are full of energy most of the times and the city has a really pleasant charm.
Those who want to immerse into the culture of the country should go to one of the museums or to the palace of culture. Furthermore, the Skanderberg place with the famous equestrian statuette is worth a visit. They form the town’s landmark. More places to visit are the Et’hem Bey mosque with the clock tower of Tirana. The capital furthermore contains a castle, which can be visited.
The Skanderberg place forms the center of the city, from which roads go to all directions like a star. The numerous political facilities, the universities and the botanical and zoological gardens are worth a visit as well. More parks and gardens are great places to enjoy the free time and recover.

Shkodra is a city in the north of Albania and the fifth largest city of the country. It is located at the lake Skutari at the boarder to Montenegro. Shkodra is affected by many battles and conquests, from the romans as well as from different aristocratic families. After recovering from the hard battles the city rises to an important trading center and has a distinctive culture till today.
The town’s landmark is the ruin of castle Rozafa. Recording to a tragic legend the castle was built by three brothers. Every night the walls of the castle came tumbling down. One day an old man told them to mure a woman into the walls, then they would never collapse and resist all enemies. The brothers agreed to sacrifice the wife that would bring food for them the next day. Two of the brothers told their women, so the third arrived alone the next day. She therefore was mured, but asked if they could keep out one arm, leg and breast to keep on feeding and hugging her child.
The castle can be visited as well as a museum about the past of the city.
The city also hosts other museums and the famous Migjeni theatre. The market of the city is also worth a visit.http://www.mawista.com/blog/en/top-places-visit-albania/
Pubblicato da Hoteleri Turizem "Albania" a 2:47 AM No comments: