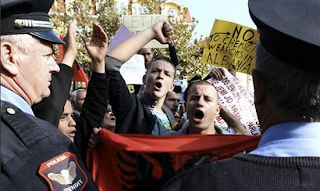 (Reuters) - Albania's government faced a growing chorus of opposition on Thursday to a U.S. request that it take on the job of dismantling Syria's chemical weapons, despite a vow by Prime Minister Edi Rama that the poor Adriatic nation would be rewarded financially for carrying out the task.
Rama, barely two months in the job, repeated that no decision had been taken, but indicated he was in favor.
"Our ‘Yes' would be linked only to a plan and agreement that will make it clear to everyone that Albania will come out of this with its head held high, the richer for it and cleaner than it is today," he said late on Wednesday.
Albania has been identified as a possible destination for the weapons stockpiles, which Syrian President Bashar al-Assad has pledged to get rid of as he seeks to turn the tide of international opinion in a more than two-year civil war. 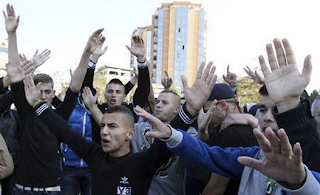 The request came under a Russian-American deal to destroy the weapons program by mid-2014, averting U.S. missile strikes threatened after an August sarin gas attack on the outskirts of Damascus that killed hundreds of people.
A source briefed on the discussions said talks with Albania had reached a "technical level", ahead of a Friday deadline to agree a destruction plan with the Organisation for the Prohibition of Chemical Weapons (OPCW) which will meet in The Hague. Under the U.S.-Russian timetable, all chemicals should be out of Syria by December 31, except for one which should be destroyed on site by March.
It was uncertain whether a site for the destruction would be agreed by Friday.
Albania, an Adriatic nation of 2.8 million people, is a member of NATO and staunchly pro-American.
But the prospect of hosting Assad's sarin gas and other chemical weapons has stirred anger and complaints that the West is exploiting its poorer, Balkan ally, which is striving to become a candidate for membership of the European Union.
In the capital Tirana, protesters outside parliament carried placards that read "No to sarin, Yes to oxygen, let us breathe", and "No to chemical weapons in Albania." 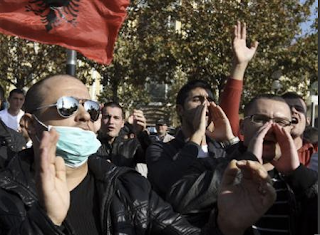 Albania has experience in such work, having dismantled its own communist-era chemical weapons with U.S. help in 2004 at Qafe Molle, behind Mount Dajt that overlooks Tirana. It also has a weapons destruction site at Mjekes, near the central town of Elbasan, where protests have also been held.
ANGER AND OPPOSITION
Inside parliament on Thursday, female opposition lawmakers seized the rostrum to voice their anger at the U.S. request.
"Disarm yourself before you talk about Syria's weapons," Rama's coalition ally, Ilir Meta, railed at the opposition from his seat as parliament speaker. "Everything will be done transparently. You should be calm about it," he said.
But a dearth of public information on what the exercise might involve has fuelled a frenzy of doomsday scenarios in Albania and angered environmentalists.
"This decision will be taken in full conformity with all the obligations the Albanian government and I personally have to every Albanian," Rama said. He said the government was seeking "full guarantees for the Albanian public and the future of the country."
The soul-searching, however, already marks a break with the past.
Albania readily offered up its territory for U.S. warplanes to bomb concrete bunkers as training before the 2003 invasion of Saddam Hussein's Iraq.
In 2010, Rama's predecessor, Sali Berisha, agreed to a U.S. request to take in six Chinese Uighurs released from the U.S. jail in Guantanamo Bay and, this year, hundreds of Iranian opposition exiles from Iraq.
Syria's Assad has said the total cost of dismantling the chemical weapons program could reach $1 billion. Experts believe it could be done for less, in the range of tens or hundreds of millions of dollars, depending on where and how the arms are destroyed.
Berisha accused Rama's government of rolling over, and warned of unrest. "We would give you a referendum, as a choice, otherwise the squares and streets will become the parliament of Albania," he said.
The ruling Socialists accused Berisha of whipping up hysteria for political gain.
Calling Berisha "Assad's consul", Labour Minister Erion Veliaj told reporters: "Give us a few hours to take a decision, but please don't ask us not to talk to our key ally."