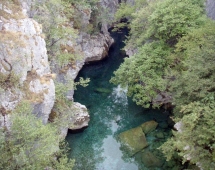 BAJRAM CURRI - 03 Janar 2013 - 14:59
Although only the first days of this year, tourist point Valbona foreign tourists are present, even increased in number compared to the night of the new year.
For several years, the presence of foreign tourists in Valbona even in moments of New Year has become commonplace. "Indeed, their presence has increased during these first days. If on the first day were 35 foreign tourists, their number has already reached 55, mostly from Germany and Israel, "says Mayor Margegaj, Rexh Biberaj. According to him, the positive is that "any day now passes not at this point without the presence of foreign tourists tourism, which has added income for local residents who increasingly are paying attention to the development of mountain tourism.
Good weather these days has affected the approach of a significant number of visitors from Kosovo. In recent days are inherent in tourist Valbona 80 daily visitors from Kosovo.
Last year the number of tourists that have been inherent in Valbona tourism amounted to about 35 thousand.
(d.b/ATA/BalkanWeb)