Snowfall 12/2012 does not remove tourists from Valbona, Albania 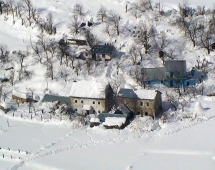 Topoje, Albania - Heavy snow the previous day have not caused any inconvenience for tourists present in Valbona national park.

"Temperatures have dropped significantly, while at night the ice-caps are present on road axes. Snow fell a few days ago has reached over 15 centimeters thick, but without causing any trouble," said Mayor Margegaj, Rexh Biberaj.

According to him, tourists present during these days have continued their program despite snow accumulation and cooling weather.
Valbona tourist point the number of foreign tourists reached 50, mostly German and Austrian. "Tourists are in Valbona of 4 days, while snowfall does not have worried their tourist program," said Biberaj.

Meanwhile, in the service of tourists are on full alert all the guesthouses feature Valbona with 110 total beds. "In the winter period so beds enable coping with the influx of tourists present for a few days," said Biberaj.
Mountain tourism development already has a perennial stretch Valbona tourist point. In addition to foreign tourists often present, especially on weekends, there are plenty of visitors from Kosovo.
This is done if the past year the number of tourists in Valbona reached 25 thousand, this year the number of tourists visiting Valbona has reached about 35 thousand.
(d.b/ATSH/BalkanWeb)
Pubblicato da Hoteleri Turizem "Albania" a 11:13 PM