Discovery Berat in your Albanian low-cost holiday,Berat was inscribed in the UNESCO list as a world heritage city

Berat is a very special city. Its age, culture, and folk traditions make it one of the most interesting towns in the Mediterranean area.
http://www.berat.info/


The city’s history began with the creation of a fortified acropolis in the VI Century B.C. However, there are traces of human settlement dating back 4000.

Contrary to the other cities in Albania, Berat was the only one that managed to preserve the qualities of civilization throughout all of its history. The soaring castle of Berat commanded the road to the port of Vlora and the city of Korça and dominated also may lesser passes. The city was militarily strategic and it held the key to the exploitation of the rich natural surroundings. As the major empires took turns in conquering Berat they left their remarkable traces which are still visible today. In ancient times Berat was called Antipatrea, after Antipater, Alexander the Great’s regent of Macedonia and later Pulcheriopolis after the sister of Emperor Theodosius II. The Romans called it “Albanorum Oppidum” (Town of the Albanians). During the second Bulgarian Empire, 960 – 1018, the town was named Belgrade (White Castle). It became the center of the feudal Muzaka family in the Middle Ages. Ottoman rule began in 1417. At this time Berat developed as an important strategic and commercial centre. During the Ottoman era, Berat had about 5.000 inhabitants and was one of the largest cities and an important centre in Albania. In 1774 the Pashalik of Berat was created under Ahmet Kurt Pasha, which in 1809 became part of the Pashalik of Ioannina, the ottoman province which included today’s southern Albania and northern Greece.
The Present

The city of Berat is located on the southeast of Albania. It is located among 7 hills and divided in two parts by the picturesque river Osum. On the east side of the city resides the mighty “Saint Tomor” (Mount Tomor), the so-called Olympus of Albania. On the west the mountainous landscape is completed by Tomor’s brother, Mount Shpiragu with the deep “wound” in its body. Legend has these as the bodies of two feuding brother giants.
Berat is the place of sun and flowers. The area enjoys 300 sunny days per year as a gift from God and 25 square metres of green spaces per person, gardens and parks, are maintained by its citizens, who are well known as lovers of flowers.
Berat has a population of 78.000 inhabitants. The hills and the mountain slopes around Berat are planted with fig trees, olive trees and other fruit trees.
Its religious buildings and important monuments are well known for their architectural excellence. The monuments that are the most complete are from the XIII century or later. The castle and its fortification walls are interwoven like a mosaic of different ages. The various quarters “Kala”, “Mangalem” and “Gorica” nestle on the skirts of the hills and valley sides of the town.
Heritage 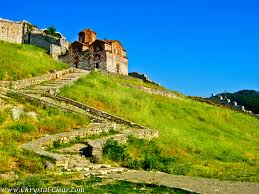 Berat has a rich and varied heritage. The most distinguished of the tangible heritage are the castle of Berat, the old churches and mosques, the vernacular houses, the picturesque natural setting, iconography and ethnography. All combined give to Berat a unique physiognomy and identity. In 1961 the government of Albania awarded to Berat the status of a museum city and in 2008 Berat was inscribed in the UNESCO list as a world heritage city.
Berat breathes out a strong sense of the past as its heritage is still put into use: the vernacular houses are still inhabited today; the old characteristic streets are filled with the sounds of children playing on summer afternoons and people going about their daily chores. The whole setting has been preserved with minor changes in its overall structure.


Berat was inscribed in the UNESCO List in series with the city of Gjirokastra on 8 July 2008.  Both  cities are considered as rare examples of an architectural character typical of the Ottoman period. Berat and Gjirokastra applied for World Heritage status according to criterions III and IV of the justification for inscription, under which the status was granted. According to criterion III Berat and Gjirokastra bear outstanding testimony to the diversity of urban societies in the Balkans, and to longstanding ways of life which have today almost vanished. Berat bears the imprint of a more independent life style, linked to its handicraft and merchant functions. The description under criterion IV is that the two towns of Berat and Gjirokastra bear outstanding testimony to various types of monument and vernacular urban housing during the Classical Ottoman period, in continuity with the various medieval cultures which preceded it, and in a state of peaceful coexistence with a large Christian minority, particularly in Berat.
In Berat the UNESCO status was awarded to the old Castle, the two historic districts of Mangalem and Goricaand the Medieval Center.

GORICA  is the third residential quarter of Berat, having developed since the 16th century. Located across the river and until recently connected to Berat only by the landmark Gorica bridge, most houses have large gardens giving it a more rural character. Gorica has retained much of its original way of life and still breathes the silence and slow pace of the past.
Information: Mapguide of Berat

MANGALEM The historic quarter of Mangalem is a well preserved area containing buildings of characteristic architecture and charming narrow alleys. While the Mangalem riverfront has traditionally been a bazaar area, the residences of merchants and artisans extend on the steep slope above. The quarter is shaped like an elegant pyramid, on top of which is the castle. The harmonization with the terrain is performed with a rare architectural mastery. The main visual characteristic of this quarter is the number of windows which have given the whole city the epithet “ the city of windows on top of each other”.

The CASTLE of BERAT rises on a rocky hill on the left bank of the Osum river and is accessible only from the south. It is the oldest and most representative monument of the city. After beign burned down by the Romans in 200 BC, the walls were strengthened in the fifth century under the Byzantine Emperor Theodosius II, and were rebuilt during the 6th century under Emperor Justinian and again in the 13th century under the Despot of Epirus, Michael Angelus Comnenus. The churches inside the fortress were largely built from this time onwards and because of their characteristic architecture are preserved as cultural munuments. The castle hill rises 187 m above the sea level with an area of 9.6 hectares. There are 24 towers of different forms and sizes along the impressive Hellenistic and medieval walls. The interior once contained 42 churches and chapels, though now there are only 8 intact shrines and the ruins of 2 mosques. The interior of the castle is still inhabited today.

The King Mosque is one of the main mosques of the city. It is composed by the prayer hall, the porch and the minaret. In the centre of the ceiling are rosettes with inscriptions from various Kuran writings. A frieze below the ceiling displays the 99 beautiful names of God. The massive painted ceiling, the wide two stories Mafil supported on two wooden columns, the Mihrab at the eastern wall and the Mimbar form its decorative structure.
King Mosque

The Helveti Tekke was built in the XV century and was rebuilt by Ahmet Kurt Pasha in 1782. It has a wooden ceiling and interior decorated with Ottoman paintings of exceptional beauty.  The paintings feature geometric shapes, natural sceneries, mosques and vernacular houses. Small holes are spread through the walls to improve the acoustics in the hall. Inside the holes and within the walls are ceramic vessels used to this purpose. This technique was commonly used in the temples of the Helveti order of Sufi (a tradition of Muslim mystics).
Helveti Tekke

The Dervish Chambers are the rooms were the Dervishes (priests of the Sufi sect) were accommodated. On the first floor are the stables that were used for the animals and on the second floor are the rooms which house today the Regional Directorate of National Culture. The rooms are small with characteristic chimneys and windows.

Guided Tours Berat
My name is Marius Qytyku and I am a local guide in the city of Berat. I offer guided tours to tourists and people that are interested. The most common tour I offer includes a tour of the castle of Berat (the old city), visits to the Ethnographic Museum and Onufri Iconographic Museum, a walk in the other two historical quarters of Mangalem and Gorica, and a visit to the Medieval Centre. I have plenty of information regarding what we are going to see. My customers have also the chance to see inside monuments such as Byzantine and Medieval Churches and Mosques which are otherwise are closed to the public.
I hope that at the end of the tour you will have an understanding of the past and present of Berat and Albania in general. I always like to drive tourists into the heart of the social conditions, culture and mentality of my country. Above all, this is the lofty mission of history: to have a better understanding of people and nations. I also take into consideration also special interests that tourists might have and want to explore in the city.
A tour might last from 2.30 to 3 hours. Price 20 €
mail: mqytyku@yahoo.com                  tel: +355 69 37 71 773

The guesthouse was started in 2005. It is an appropriate place for bed and breakfast tourism, as it is situated in the 24000 years old castle of Berat considered a living museum.
Special qualities are the quietness and the panorama.

LOCATION of Kris Guesthouse is in the Castle of Berat. Once you enter the main Castle gate, turn right and walk past the castle wall for about 70 meters. The guesthouse is at the open space where the bust of Constantine is. Look at the map for clearer instructions.

SERVICE The guesthouse has a playground for children. It has also a garden and a veranda from which is possible to see the sunset and surrounding churches. It has a Bar, Parking area, free Internet WI-FI, telephone, air conditioner. Breakfast is free and normally is cheese butter, jam, egg omelette, milk